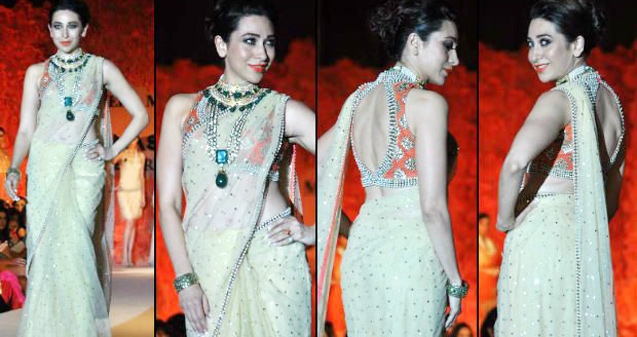 Karisma Kapoor, Bollywood actress and mother-of-two, credits yoga for helping her shed 24 kilos in nine months post pregnancy and says the traditional system of exercises can work wonders for children too.

"I think it is great to get the kids started on yoga. My daughter is learning yoga at school and she practises it with me sometimes. My son is only 3 years old and too young to do it, but he sits and laughs and giggles at poses," Karisma said in Mumbai.

The actress, who debuted in Bollywood at the age of 16 and went on to give award winning performances in 'Zubeidaa', 'Raja Hindustani', 'Dil To Pagal Hai' and 'Biwi No 1' has launched her first book, a primer on motherhood and losing weight.

While younger sister and actress Kareena has gone public about her passion for yoga, Karisma says she "chanced upon it late in her life."

"I was a non-believer for long even though it was working so well for my sister. Yoga takes longer to show results but it's really good as it cleanses your body of toxins and helps you breathe better, sleep better," says the actress.

In "My Yummy Mummy Guide: From Getting Pregnant to losing all the weight and beyond," the 39-year-old writes about the different emotions women go through - dealing with the baby, managing the family, tossing about on sleepless nights - and advocates yoga as "a great form of relaxation."

Once a "hard core gym person", Karisma says that within a month of taking up yoga she could see "dramatic results in her body and mind."

Her routine includes yoga four times a week with fast music like those by Rihanna, Adele, Pitbull, Jay-Z and other hip-hop artists followed by a meditation session at her home in Mumbai where the actress currently lives with daughter Samaira and son Kiaan.

"After my first baby, I didn't do any yoga. I did regular gym and cardio routines that helped me shake all the weight off. After my second baby, I did power yoga and that too shook the weight off. You can go either way but I would highly recommend that, if you can afford it, you should employ a personal yoga trainer. It helps you stay motivated and lose weight faster."

She says the path from being a svelte actress to a pregnant woman who had put on 24 kilos during her pregnancy and coming back to her thin self was more challenging than playing the role in 'Zubeidaa', the 2001 film by Shyam Benegal. "I wanted to reveal my secrets to everyone".

Karisma says she looks up to her mother and grandmother as role models.

"Both of them are amazing inspiring people and they kept giving me tips but this book is all about my own thoughts and tips on pregnancy, motherhood and life-something which no one has ever written about. This book is a legacy to my children more than my films will ever be," she says.

The actress' guidebook coauthored by Madhuri Bannerjee has been published by Penguin under its imprint Shobhaa De Books, the same under which Kareena Kapoor had launched her book "The
Style Diary Of A Bollywood Diva," a style guide on fashion and glamour.

"I am really a private person so Shobhaa De had a wonderful chat with me and convinced me to write. She was very involved, and it has been a great platform to write about what I feel," says Karisma.

The book also has pointers for single parents. "It is not easy being a single parent. Period. It is double the responsibility for the one parent and it can be very tough on the children," writes the actress who entreats couples to "try every possible thing" before decide to separate.

"Moreover," she writes, "if you cannot get back together, remember that a divorce is not the end of the world. You and your child will survive. Remember to get enough support for your family when you make this choice," says the actress.

I do not call producers to ask for work: Sonakshi Sinha

A Minute With: Arjun Rampal on Satyagraha